Formation and Coalscence of Supermassive Black Hole Binaries in Supermassive Star Collapse
Collapse of a rapidly differentially rotating supermassive star with a tiny initial m=2 density perturbation. The star is unstable to the non-axisymmetric m=2 mode, collapses, and forms two black holes. The nascent black holes subsequently inspiral and merge under the emission of powerful gravitational radiation. The collapse is accelerated by a ~0.25% reduction in the adiabatic index Gamma, motivated by electron-positron pair production at high temperatures. Simulation from Phys. Rev. Lett. 111, 151101. [Credits: C. Reisswig]

Black hole formation: density profile
A volume rendering of the fluid density of a collapsing 75 M_sol star. Core bounce occurs at t = 0 ms. Approximately 68 ms after bounce, the nascent protoneutron star is unable to withstand the gravitational pull of its own mass. Gravitational collapse sets in and a black hole is formed. Surrounding material is beginning to hyperaccrete onto the black hole when the simulation stops. A long term goal is to be able to follow the entire hyperaccretion phase until a stable accretion disk around the black hole is formed. This is a possible model for the central engine of long gamma-ray bursts. Simulation from Phys.Rev.Lett.106:161103,2011. [Credits: C. Reisswig, C. D. Ott] 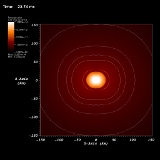 Binary black hole merger: dynamics and emitted gravitational radiation
Dynamics of the inspiral, merger and ringdown of an equal-mass spin-aligned binary black hole coalescence. The colorful spiral pattern is the Weyl scalar psi4 indicating the emitted gravitational radiation. Since the two spins are aligned with the orbital angular momentum, but different in magnitude, the radiation is asymmetric and there is a preferred direction of radiated linear momentum. The merger remnant is thus “kicked” to the opposite direction. In this particluar case the “kick” is rather weak. It is only v_kick = ~25 km/s. Simulation fromPhys.Rev.D76:124002,2007. [Credits: R. Kaehler, C. Reisswig, L. Rezzolla]

Binary black hole merger: asymmetry in emitted radiation
The absolute square of Psi4 projected onto a spherical 2-surface seen from above down along the z-axis perpendicular to the orbital plane. This binary black hole configuration has equal masses with spins that are aligned with the orbital angular momentum and equal in magnitude, but opposite in direction to each other. This generates an asymmetry in the radiation which can be seen in the movie. If the radiation was symmetric, the color pattern would be spherically symmetric as well. Asymmetric radiation leads to a recoil imparted to the center of mass of the system. In particular, the merger remnant will obtain a “kick”. In this particular case, the kick velocity is v_kick ~ 225 km/s. Simulation fromPhys.Rev.D76:124002,2007. [Credits: C. Reisswig] 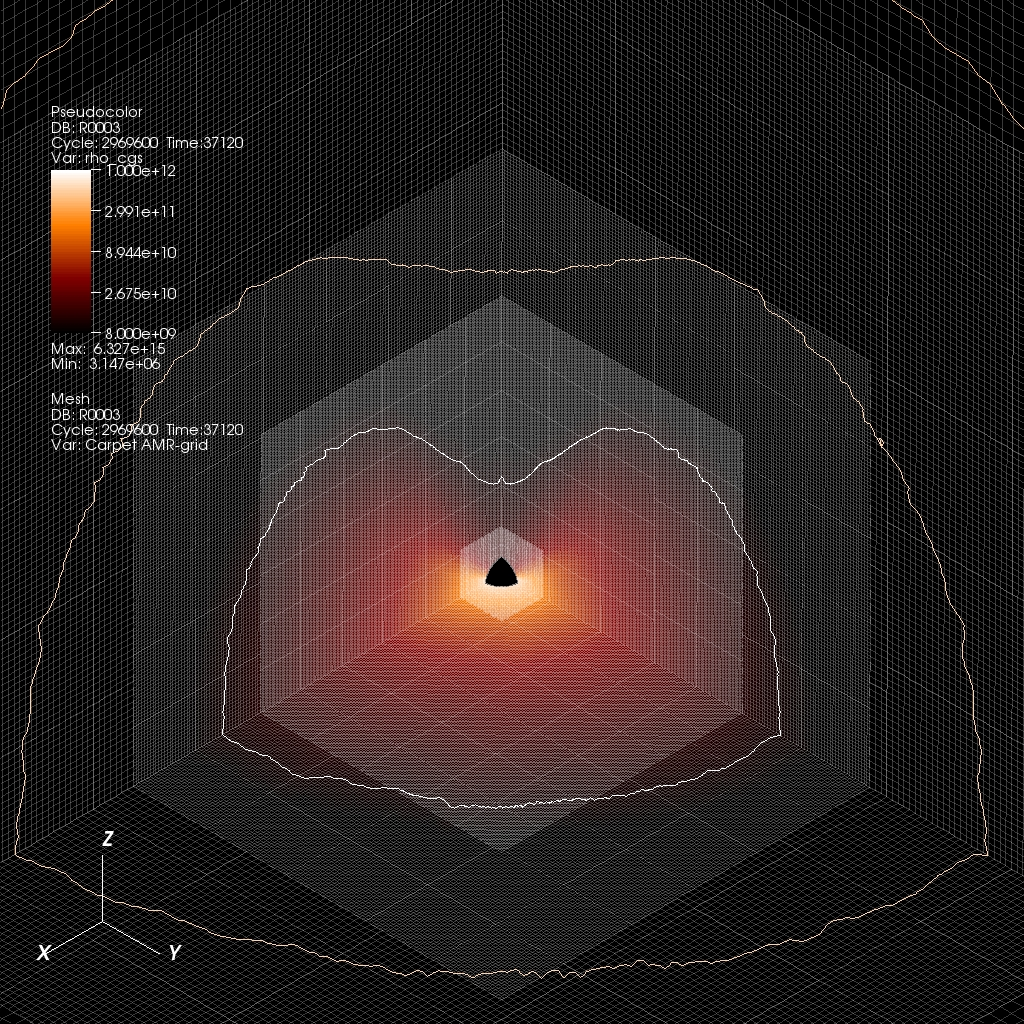 Grid setup: Core collapse and black hole formation
This image shows the central region around a collapsed stellar core in the hyperaccretion phase. The black surface is the aparent horizon. The density profile is indicated by red colors. In addition, contour lines of additional density values are visible. Simulation from Phys.Rev.Lett.106:161103,2011. [Credits: C. Reisswig and C. D. Ott] 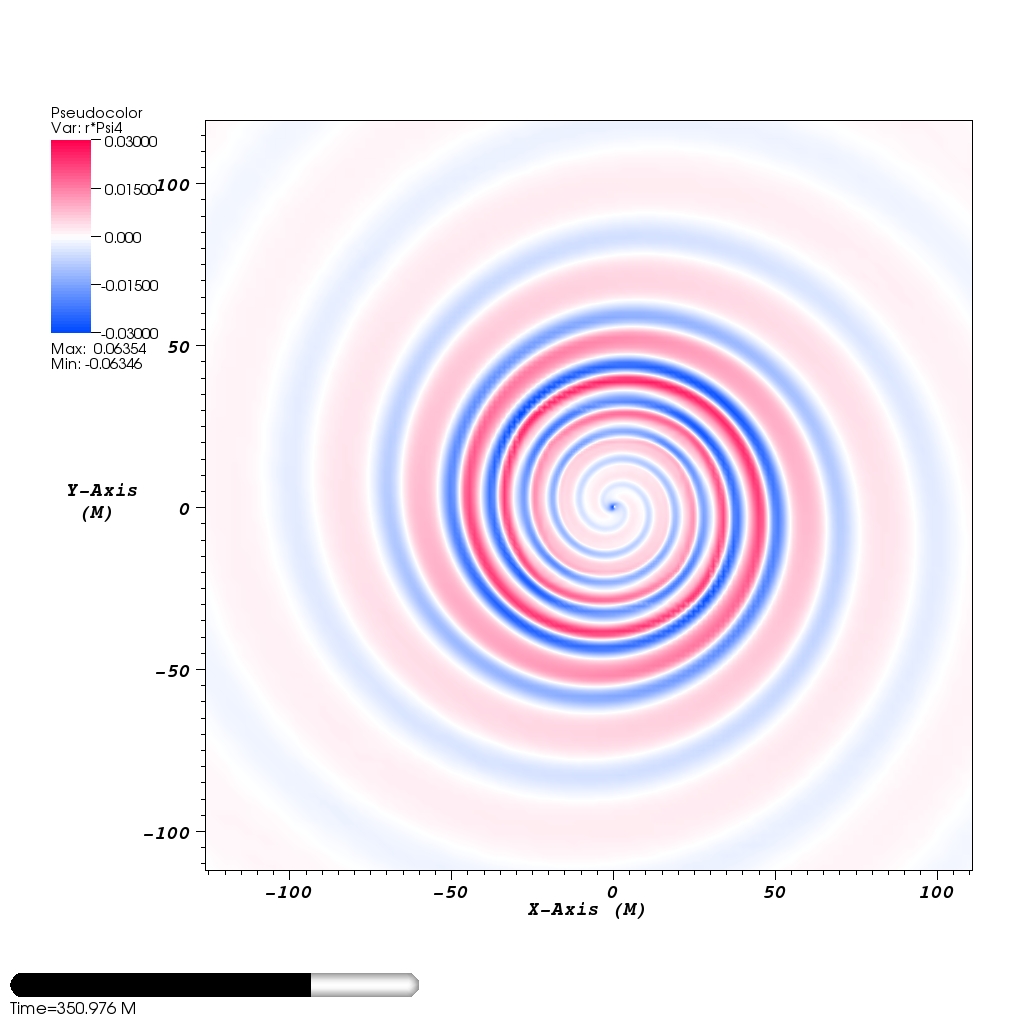 Binary black hole merger: Emitted gravitational radiation
Gravitational radiation (psi4) emitted in the orbital plane of an equal-mass spin-aligned binary black hole merger. The two black holes are at the center of the image, however, too small to be seen at this scale. Since the radiation is slightly asymmetric in this particular case (effect too small to be visible), we have non-zero net linear momentum. The outcome is a “kicked” merger remnant. Simulation fromPhys.Rev.D76:124002,2007. [Credits: C. Reisswig]